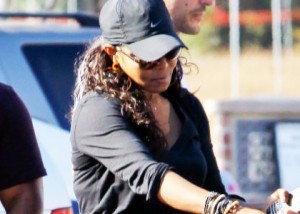 In an outfit a little reminiscent of her old glory days, Janet Jackson hurried out of Taverna Tony’s Greek Restaurant in Malibu on Aug. 26. The sister of the fallen King of Pop Michael Jackson wore a black top, black baseball cap, black pants, and platform black shoes while dining with friends and enjoying Greek cuisine.

In the midst of multiple scandals involving the Jackson family, Janet and siblings Randy and Rebbie accused the will executors of causing the issues and distracting from the questions regarding the legitimacy of their late brother’s will.

It appears that Janet chose to relax and enjoy some Greek delicacies with good friends and stay away from the legal battle. It’s not the first time the famous 1990’s singer picks up that particular Greek restaurant in Malibu.