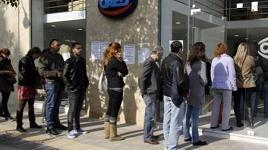 With Greece’s unemployment rate at a record 23.1 percent and rising, the costs are growing too. The National Confederation of Greek Commerce (ESEE) estimated that joblesness, with nearly two million people out of work, costs the economy about $5 billion a year.
According to OEAD, the Greek unemployment agency, out of almost 800,000 registered unemployed only 128,000 were eligible for unemployment benefits, which means 672,000 people have no income at all.
ESEE said OAED’s administrative expenses are now $1.02 billion annually. Given the rise of unemployment, this figure is accurate only for July 2012. At the same time, pension funds are losing $4.77 billion because of a 23 percent cut in the minimum wage.
Before the economic crisis began two years ago, the unemployment rate was only 8 percent. To make things worse, a fall in bank deposits by 27 percent has made banks nearly shut down lending to businesses, asphyxiating the market.
Private consumption has fallen by $81.61 billion, leading to the closing of 68,000 businesses, shrinking the economy by seven percent. ESEE also estimates the cost of unemployment in commerce at almost $1.25 billion, about 25 percent of the total cost of unemployment.
Source: tvxs.gr