GRNews
GreekReporter.comGreeceFires Spread in Greece, State of Emergency on Rhodes

Fires Spread in Greece, State of Emergency on Rhodes 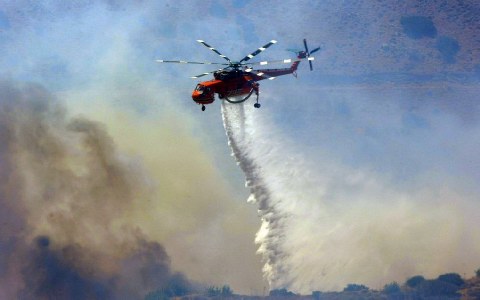 The plague of wildfires in Greece this summer has hit forested areas on the Greek islands of Hydra, Rhodes and Crete and in the northern city of Florina, the Athens News Agency reported.
A state of emergency was declared in a part of Rhodes after an extensive wildfire broke out in the forested region between Agios Silas and the Petaloudes valley. The fire was quickly fanned by strong winds.
Local residents said they suspect arson, as in recent days unidentified persons had attempted to start a fire in the same area on at least four occasions. Firefighters from Athens were expected to arrive on the island on Aug. 29 to reinforce the local service.
Another fire broke out on Aug. 28 in a forested area at Neos Voutzas in eastern Attica. Three fire engines and 17 firefighters were battling the blaze on Hydra, while the fire in Florina was being fought by by 30 firefighters. Earlier, it was reported that the fire in Omalos, Chania prefecture, on Crete was put under control.