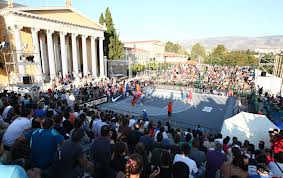 One of the most competitive and exciting new forms of basketball, the inaugural 3-on-3 World Tournament, was held in Athens from Aug. 23-26 with a star-laden American team winning the women’s title, 17-16 over France, while the American men lost to Serbia in the semi-finals, 20-16. The women’s team was made up of college stars while the men relied on amateur street players.
The event drew packed crowds to a court set up outside the historic Zappeion Megaron Hall in downtown Athens, during one of the hottest summers on record in Grece. Following basically the same rules as the traditional basketball except that is played on only half the court, 3-on-3 is one the most exciting and competitive short-sided games in the world.
Previously known as FIBA 33, the 3-on-3 format was initially developed on inner-city asphalt outdoor courts in the United States, a game that in legendary hoop shrines such as the Rucker Tournament in New York City draws talented street players against college and even pro stars.  FIBA hopes it would gain full Olympic status by the coming 2016 Summer Games to be hosted in Rio de Janeiro, Brazil.
With more than 250 million players worldwide and among the most played recreational sports in the world, 3-on-3 is seen as a key motor for the growth of basketball. The game began developing in 2007, when it was tested at the 2007 Asian Indoor Games in Macau, was introduced at international level at the 2009 Asian Youth Games in Singapore and made its worldwide competitive debut at the 2010 Youth Olympics, also in Singapore.
Fast and exciting, and lasting only 10 minutes, the game is divided into two periods of five minutes each, while no timeouts are allowed. Unlike regular basketball where players can score two or three points, there is a one-point and a two-point area. Each team consists of four players, of whom three are on the court at any given time, plus one coach. The winner is the first team to score 33 or more points. Visitors or resident of Athens had the chance of watching international and Greek 3ON3 both men and women teams competing one another for the champion title.
Patterned after streetball, 3×3 basketball is played on a halfcourt and lasts just 10 minutes, unless one of the teams reaches 21 points before that, something the U.S. women did in their first seven games. There is a 12-second shot clock. One point is awarded for free throws and shots inside what is the 3-point arc in the “regular” 5-on-5 game, and two points for shots beyond that arc.