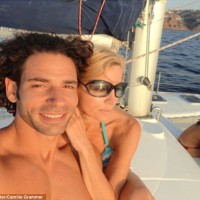 “Real Housewives of Beverly Hills” star Camille Grammer is the latest celebrity to vacation in Greece this summer. The 43-year-old tweeted a photo of her and 35-year-old boyfriend Dimitri Charalambopoulos setting sail around the Greek islands.

The couple began dating about a year ago, after Camille’s very publicized divorce from Hollywood actor Kelsey Grammer. Charalambopoulos is a bankruptcy lawyer, and his relationship with the blonde reality star will be featured on the upcoming new season of the Beverly Hills “Real Housewives” edition.

Things seem to be getting serious between the two. Back in May, Grammer mentioned in an interview that her boyfriend was taking her to Greece to meet his parents. She also said they planned to spend about two or three weeks touring the islands and visiting Charalambopoulos’ family.