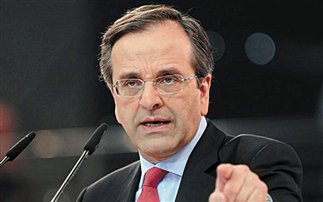 One of Germany’s most popular tabloid newspapers, Bild, interviewed Greek Prime Minister Antonis Samaras and asked him to sign a letter of guarantee that Greece will pay back its international loans, most of which come from Germany. That came ahead of his talks with Chancellor Angela Merkel.

Bild has published articles mocking Greek politicians, football players, singers, and others. This time the paper’s officials produced a letter of guarantee written in ancient Greek font style and included some provisions that he “vows personally” to ensure repayment.

The letter also asked that financial aid provided to Greece will not cause trouble to German taxpayers;  Greece will take any necessary measures to exit from the crisis; including sales of uninhabited islands if needed, and agrees  to pay off the total amount of debts it has been offered including interests.