Angelina Jolie and Brad Pitt ‘Love Greece Too Much to Leave’ 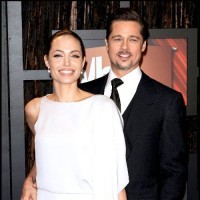 Angelina Jolie and Brad Pitt are making their way around the Mediterranean with all six children. Visiting Halkidiki on a mega yacht, the couple, who confirmed their engagement in April, have been fighting off rumors as to when the wedding will take place.

Many have speculated the ceremony will happen in Greece, but Jolie shot that down when an onlooker told The New York Post she laughed off a Greek restaurant owner’s inquiry of whether she was ready to get married after wearing a white dress out to eat. Jolie reportedly replied, “Not yet. We love Greece too much to leave…we have other islands to go to before heading back to France.”

The couple are also expected to visit Mykonos and Santorini before leaving for France, where their home in a French province is currently undergoing renovations.