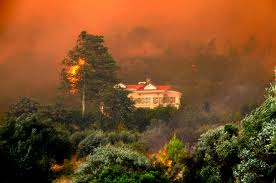 With major wildfires raging for days across Greece, the country’s Secret Service has been called in to investigate whether arson is involved. It’s common in Greece for forested land to be deliberately burned so it can be developed.
On the Aegean island of Chios, the blaze burnt thousands of acres of forest, olive groves and plantations of mastic trees whose production plays an important role in the island’s economy.
Greece’s Public Order Minister Nikos Dendias announced that about 20 fronts were out of control and authorities want to see if the fires had been set. Dendias said in many cases authorities have “indications, if not proof, that the fires were lit intentionally,” including blazes on Chios and the western resort island of Zakynthos. On Aug. 19, police arrested a French couple on Andros on suspicion of accidentally starting a forest fire.
Forest fires are frequently present during Greece’s long hot summers, but the country has seen hundreds of blazes in recent weeks forcing Greek Minister to call in the investigators.”We face an incredibly large number of fires,” said Dendias, adding that 589 wildfires have begun in the past 10 days alone, with 16 of them starting on Aug. 21.
(Source: AP)