TechNews
GreekReporter.com Greece This is Miss Greek Crisis 2012! But She's Not Thrilled With It

This is Miss Greek Crisis 2012! But She's Not Thrilled With It 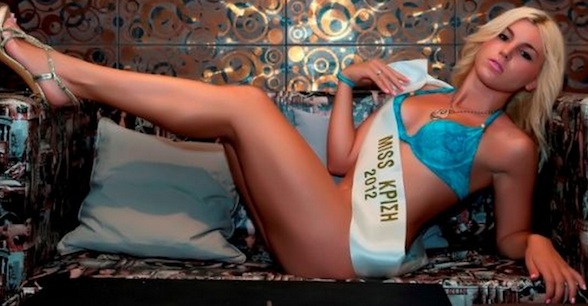 The Greek economic catastrophe has made life ugly for a lot of people, but one beautiful figure has emerged: Anastasia Katmertzi, 19, who captured the title of Miss Crisis 2012 in a pageant held in Artemida area, eastern Attica. Many people, looking for something else to talk about besides financial problems, gathered to enjoy the glamorous event and admire the beautiful girls who were aspiring to win the title with the dubious name.
Officials of the beauty contest thought they should name one of the girls Miss Crisis 2012, given what is going on in the country, and Katmertzi got the attention of the press. She said she does not intend to work as a model although photographers loved her! While she is studying gymnastics, she said she’d like to work as a singer soon.
She told the radar.gr reporter that she is happy the judges gave her a title but she wasn’t crazy that it was attached to the crisis. “I wish I was named Miss Spring or anything similar instead, and that Greece exits the financial crisis soon,” she said.

The world after the coronavirus pandemic will look very different, according to a new book from Yale professor Nicholas Christakis.
Greek News

Anna Diamantopoulou, the first Greek female on the shortlist to lead the the OECD, announced on Monday she is withdrawing from the race.
Greek News