Fire on the Greek Island of Chios Threatens Villages, Homes 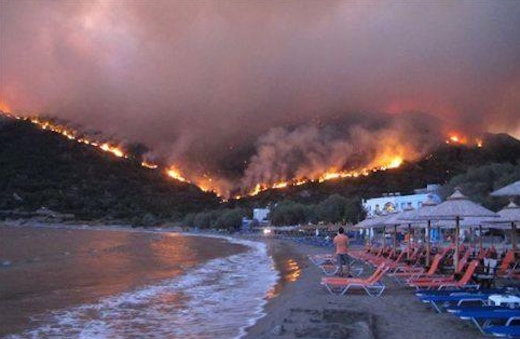 One of the largest fires of the summer broke out today on the Greek Island of Chios. The strong winds do not allow fire-planes to operate.  About 80 firefighters are on the scene trying to put out the fire which has already burned half of the island’s only forest.
Local authorities have reported that the fire which broke out at 4.00am on August 17th has threatened until now 10 villages of Chios including Anavatos. Lithi, Pirgi, Mesta, Vessas, Elata and others. In many cases the flames touched houses or burned fences of homes, while the fire has moved very close to the Greek army base “PAP” near the Vessas village.
Local media are reporting that the smoke can be seen from the island of Crete which is located more that 60 miles south.