Pangalos Says Greeks Still Eating it All Together 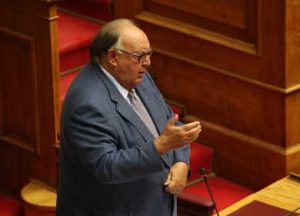 Former Deputy Prime Minister Theodoros Pangalos, who stirred anger when he said that the Greek economic crisis was the blame of both politicians and the people who accepted jobs from them, is stirring the waters again with a new book that claims it’s still going on, despite a crushing economic crisis that has the new coalition government ready to impose more austerity.
In an interview with SKAI TV, Panagalos, a heavyweight in the PASOK Socialist party before resigning this year, referred to his statement, “We ate it together,” – the title of his Internet book – and said it perhaps should be called “We’re still eating it together,” alluding to how he believes most Greeks have partaken of a feast at the government trough for decades, creating a staggering $460 billion debt. That made the government of former Prime Minister George Papandreou, then also the leader of PASOK, seek aid from international lenders, who provided it on condition of deep pay cuts, tax hikes and slashed pensions.
Pangalos said wild overspending is still going in certain areas where the privileged are protected, while the new coalition government of New Democracy Conservative leader Antonis Samaras – along with PASOK and the Democratic Left – is going to lower the boom again on workers, pensioners and the poor. He launched a website based on his most notorious quotes,, www.mazi-ta-fagame.gr, asking Greeks to provide information about mismanagement in the public sector, even though his party was responsible for much of it.
Pangalos said all 300 Members of Parliament should be put out because they are lying and telling myths to the Greeks about the country’s economic condition while insulating themselves from the sacrifices they are demanding of others. He said, “A lot who steal a little do a greater damage than a little who steal a lot,” an apparent reference to unchecked corruption and political thievery.
He said that has put the country in a spot where “There is no margin for negotiation,” with the Troika of the European Union-International Monetary Fund-European Central Bank (EU-IMF-ECB) which wants the government to make another $14.16 billion in cuts or lose continued rescue loans.

Six Women Murdered by their Husbands in Seven Months in Greece