GRNews
GreekReporter.comEuropeLondon Greeks Campaign: "F**k This, I'm Off to Greece"

London Greeks Campaign: “F**k This, I’m Off to Greece” 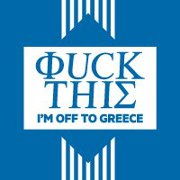 The Greek community of London, trying to aid Greece during a crushing economic crisis, is using the publicity generated by the London 2012 Olympics as a springboard for a defiant, if slightly profane, campaign to promote their homeland abroad

In collaboration with the advertising company Mother, they are trying to attract tourists and raise money on behalf of Doctors of the World. With the provocative slogan: “Φuck this. I’m off to Greece” which can be found on Facebook, they invite Greeks as well as people of every origin willing to aid Greece to “like” their page and contribute to the effort. The Greek letter φ translates to “f in English.

There are only three steps to take in order to complete the Greece-focused goal: share the page to spread the word, like the page to enter a competition offering a free vacation in Greece, and order a T-shirt costing £15 each ($23.50) (including taxes and delivery costs). The money collected by the sales will be donated to the Doctors of the World Greek office.

Officials of the company invite supporters  “to wear your T-shirt with pride around London and get at least one photo taken where you’re sporting the T-shirt in an ‘appropriate’ location. It could be in a stadium, a crowd or simply in a never-ending queue for a bus to work. Post any snaps to our Facebook wall and we’ll re-post and re-tweet the best ones.”