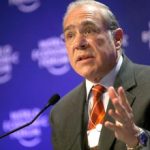 PARIS – Despite a crushing economic crisis, Greece should stay in the Eurozone of the 17 countries using the euro as a currency, but must continue to implement reforms at the same time, Angel Gurria, Secretary-General of the OrgThe necessity that Greece remains inside the Euro zone was – for once more – underlined by the General Secretariat of the Organisation for Economic Cooperation and Development (OECD) said. The OECD help governments foster prosperity and fight poverty through economic growth and financial stability
Gurria also reiterated support for the European Central Bank (ECB) role in trying to keep the Eurozone intact. There are fears that if Greece cannot make payments to international lenders providing $325 billion in bailouts that it could be forced out and bring down the whole economic bloc.
“The President of the Central European Bank Mr. Mario Draghi clearly stated that the Central Bank of Europe cannot solve this state economic crisis inside the Eurozone through the bank markets and I, on my part support this policy” Gurria stated during in an interview with the German newspaper Neue Osnabrucker Zeitung.  “The signal towards the markets was clear; the speculators will lose their bets against Euro as the Central Bank of Europe will put in action all the available means to fight them,” Gurria added.
The ECB on Aug. 2 said it would put urgent measures into action to alleviate the crisis inside the Eurozone and in moved to repurchase the debt of some Eurozone members in the secondary fund market. Gurria stated, however, that Eurozone members facing financial problems should move toward reforms to regain their competitiveness and financial well-being. “The support from the Central European Bank offers the necessary time” Gurria noted.