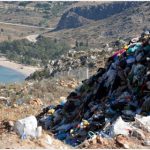 Greece, struggling through an economic crisis, isn’t doing well with waste management either, finishing at the bottom of the 27 member states of the European Union in a report ranking how well countries do in collecting, sorting and dealing with the end products of their societies. The European Commission, which said there is a massive gap between countries such as Austria, Belgium and Denmark who rated higher, while Bulgaria, Cyprus and Greece didn’t fare as well.
A report from the General Environmental Department of the Commission said that 27 member states are classified in the ranking list according to 18 criteria, such as the overall amount of waste that is being recycled, access to waste collection services or according to breaches of the relevant European legal system. The member states are evaluated by receiving green, orange and red flags according to their performance.
Austria, the Netherlands, Germany, Great Britain and Finland were given one red flag, scoring well, while Greece received red flags for 16 out of the 18 criteria, while earning a green flag only for the access to waste management services. Austria and The Netherlands scored a high of 39 points for its efforts to control waste, while Greece had only 3 points and Bulgaria received 8 points.

Mani was the place where the Greek uprising against Ottoman rule actually started and not in Kalavryta on March 25th, 1821 - as is often believed.
Australia