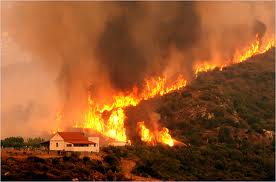 ARCADIA, Greece – A big fire tore through a forested area close to Anemodouri area here on Aug. 8, prompting Greek authorities to ask the army to help in efforts to put out the roaring blaze, while other fires were tearing through other parts of the country as well.
In Arcadia, 135 firefighters were trying to extinguish the fire while 59 firetrucks assisted by volunteers were struggling to contain the blaze on the ground. The day before, six people were injured and four villages, Routsi, Voutsaras, Kamaritsa and Soulari, were evacuated.
Other firefighters have been sent to another front, that of Aghia Marina area in Koropi, Attica. Almost 30 firefighters along with 10 firetrucks and one water-dropping plane were trying to protect houses from burning.
Another fire broke out in Korinthia region, close to Solomos village. Some 26 firefighters, 12 firetrucks and three water-dropping planes headed to the pine tree forest of Solomos to take try to control it. A smaller front broke out in Kardamena area on Kos, with 14 firefighters and two firetrucks and two aircraft dropping water.
In the Pikermi region, about 30 firefighters were sent after a fire broke out in the area. According to fire brigade, the front in Damassi area in Larissa has been brought under control while others in Magnesia prefecture, Kythera island and Crete’s Ierapetra were brought partly under control as well.