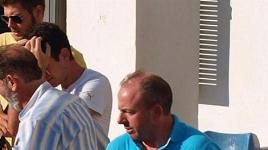 PIRAEUS -Police said that a gang led by members of the neo-Nazi party Golden Dawn invaded a ship and tried to attack a 21-year-old Pakistani immigrant charged in the beating and sexual assault of a 15-year-old girl on this Greek island when he was transferred to Piraeus.
The immigrant admitted to the attack and apologized in court to the girl, who is still hospitalized in serious condition and to her family. He is charged with attempted manslaughter, rape and robbery, and faced a Syros prosecutor to give his deposition. He said he beat the girl’s head on some rocks when she wouldn’t turn over a cell phone he was trying to steal. She was found with the bottom of her bathing suit removed. The Pakistani admitted to attacking the girl after a second test of his DNA matched a sample taken from the victim, a police spokesman said.
The state posted a lawyer for the defendant as he couldn’t obtain a lawyer willing to represent him. During his moving from Syros to Piraeus, while the ship had just arrived in the port, police said a group of 20 Golden Dawn members dressed in black t-shirts and military jeans, with one waving a Greek flag, came on the ship and tried to reach the police van where he had been placed. Seconds later, the van screamed off the ship, showing a broken windshield. The man had applied to return to Pakistan as part of a voluntary repatriation scheme funded by European Union subsidies, authorities revealed, and had been due to fly out of Greece on Aug. 8.
The relevant video can be seen here http://www.youtube.com/watch?feature=player_embedded&v=2-ZpfO-VWCM