GRNews
GreekReporter.comAustralia60th Anniversary of the Assisted Migration Agreement Between Australia and Greece

60th Anniversary of the Assisted Migration Agreement Between Australia and Greece 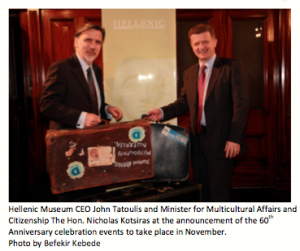 The 60-year celebration of Greek migration to Australia has been given a boost as the Victorian government announced a $300,000 donation to mark the celebration of the 60th anniversary of the Assisted Migration Agreement between Australia and Greece. This was the result of an application the museum made to the Victorian government outlining the significance of this milestone and proposing a series of events to mark the occasion.

The announcement was made at the Hellenic Museum on Wednesday August 1, by the Minister of Multiculturalism and Citizenship Nicholas Kotsiras, who spoke in both English and Greek on the day.

Thousands of Greeks migrated to Australia following the Assisted Migration Agreement between the two countries in 1952.

“Our migration story is special and needs to be told,” Mr Kotsiras said.

The money will be used to fund a series of events to celebrate the anniversary of migration starting in November this year at the Hellenic Museum.

In November, a great celebration will take place at the premises of the museum, with famous singers Maria Farantouris and Yiannis Kotsiras invited from Greece to perform at the event. A photographic exhibtion entitled Through a Child’s Eyes will be launched and will showcase the story of immigration through the eyes of children up to the age of 15.

A concert will be held based on works by Greek Australian composer Tassos Ioannides using selected songs of his that look at the plight of a Greek migrant in Australia.

“The events that we have planned will celebrate and honour the achievements of those pioneering Greek migrants, they are also part of a story, the creation of a narrative for Hellenic culture in Australia,” the director of the Hellenic Museum, John Tatoulis said.

For more information on the 60 year migration celebration and the series of events, visit the Hellenic Museums website at www.hellenic.org.au/