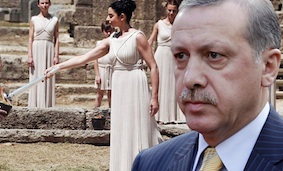 Turkish Prime Minister Recep Tayyip Erdogan stated, occasioned by the 2012 Olympic Games taking place in London, that the Olympic flame and by extension, the Olympic torch relay, has a Turkish origin.

According to star.gr, during a meeting they had with the President of the International Olympic Committee, Jacques Rogge, in London, both the Turkish Prime Minister and Turkish Youth & Sports Minister, Saut Kilic, agreed that the Olympic flame comes from Turkey.

Representatives of the Turkish government said that there is a mountain situated close to Anatalya, called Olympus, where the ground can be naturally light up due to the amount of methanium that exists in the area. According to an ancient myth, people used to light up the Olympic Torch in this place, commented Mr Erdogan.

Turkish Minister Suat Kilic stated during a press release, in a bid to convince officials of the International Olympic Committee that Turkey should host Olympics in the future, that “Turkey is the birthplace of the Olympic flame and as a result, Mr Erdogan explained to Jacques Rogge that we want the Games back in our country. The IOC has the right to bring the Olympic flame back to its origin.”