GRNews
GreekReporter.comGreeceGreek Crisis: 120,000 Euros for a Champagne Bottle in Mykonos

Greek Crisis: 120,000 Euros for a Champagne Bottle in Mykonos

By Anastasios Papapostolou
August 4, 2012
Facebook
Twitter
WhatsApp
Linkedin
Email
It’s no secret that the Greek island of Mykonos attracts worldwide jet-setters and rich celebrities during the summer, many of which have expensive habits. But how far would these VIPs go to impress their rich friends and show off to the rest of the world?
It seems that the rich crowds visiting the “island of the winds,” as the locals often call Mykonos, are willing to pay 120,000 euros for a bottle of champagne in the famous beach-bar and restaurant Nammos, located in Psarou, one of the most popular beaches of the beautiful Aegean Island.
With 120,000 euros that the Armand De Brignac Methouselah Midas bottle costs somebody could easily buy an apartment in many areas of Greece and the world. In other countries the most expensive price for the same bottle was found in Miami where it was sold for 120,000 US dollars.
Since the beginning of the summer season nobody has dared to consume the most expensive champagne bottle in Greece; however, it is rumored that this past week a rich Arab ordered the bottle which had been kept in a locker at the Nammos bar.
The incredible price of 120,000 euros for a champagne bottle is a great example of the financial and social differences in Greece, the crisis-hit country where many people live with a minimum wage which was recently lowered to under 586 euros per month.
“Taking a look at the menu of Nammos our eyes popped when we reached the champagne page. We saw bottles that go for 72,000 and even 120,000 euros. We can’t believe that somebody would spend this amount on a champagne bottle, especially now,” says a Greek beach-goer who was enjoying a coffee on the famous sun-beds of Nammos. Rumors have it that some of these sun-beds to be rented out to rich clients for the whole summer are priced at 2,000 – 3,000 euros per month.

Apart from the expensive prices and probably the most expensive champagne bottle in Europe, Psarou beach has a lot to offer and Nammos is considered one of the best places somebody can visit in Mykonos in case they can afford it.
The beach is comprised of golden sand and crystal clear water. Since 2003 when Nammos opened its doors to its jet-setting public, each summer holds a story of its own.
Each year Nammos welcomes the elite, whether that be actors, models or business tycoons. A calm surrounding, well-protected from the wind becomes the home to some oh the world’s most expensive yachts and their rich owners. 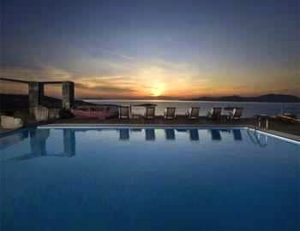