Lack of Education: The Greek Problem 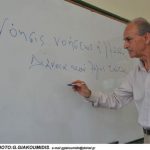 In memory of Christos Tsolakis who recently passed away, NET public television channel transmitted a past interview with Vicky Flessa. Christos Tsolakis was a honorary professor in the Pedagogical Department of Municipal Education in the Aristotle University of Macedonia. He was an enlightened man, who in his life paid much attention to the promotion of culture and the creation of a proper educational tradition in Greece.

Are you troubled by the reluctance in adoption of personal responsibility that is currently seen in the Greek society?

Some are feeling the responsibility of being consistent. However, in general terms this is not usual. Due to major cultural lack, most people show brutal behaviors.

Some people support the view that the Greek problem is not economic but cultural, educational. What is your opinion on this?

“I agree. The economic problem is only the surface. The real problem of Greece, however, is the educational lack as well as the cultural crisis. Unfortunately, we Greeks have not yet clarified the meaning of being educated. Ethical concepts such as understanding what is right and wrong, respecting the laws, understanding the meaning of egalitarianism, rate, measurement and democracy retreat in front of amorality have been long forgotten.”

Culture versus education: what differentiates them?

“In my opinion, education is the organized process where the public coordinates transmission of cultural goods. On the contrary, culture is the highest lesson that cannot be taught. The goal of education is to cultivate culture. Culture is the “light” that shines between the teacher and the student that is impossible to turn off. Culture is the completion of the perfection of human nature.

As literate someone can be called when his character, thought and sensibility have been shaped by knowledge and wisdom, ethics, aesthetics, the good and beautiful and all the achievements of  global culture. As cultured and educated can be called those people who do not necessarily own degrees and demonstrated scientific knowledge. As cultured can be called whoever loves and does what is right. Even the illiterate people can be cultured and educated. The only prerequisite is for someone  to have read the books of life, society and nature. In our country, unfortunately we lack those people.”

How can the relationship between teachers and students can be triggered? What can change in this relationship?

“The responsibility is collective. It is the parents; teachers’ as well as the state’s responsibility to build this relationship between teachers and students. It is one of the biggest problems for a state to offer solutions to the educational problem that will aim at the core of the problem and at the same time reciprocate to the expectations for a well-organized educational system. What is observed in the recent Greek society is a general indifference and the lack of minds and visions. This can be observed in the applicable policies. The orientation of education should be the promotion of culture and not only techniques on how to seek for a job vacancy. School should not be only dedicated to the job markets but mainly dedicated to education. Thus, the Greek problem is not economic but cultural. I have already proposed to the Ministry of Education to create special schools dedicated to children in peripheral areas such as Epirus and Thrace in order children to learn from a very early age how to write and read the Greek language properly as well as have the necessary education from the age of 3 years. For this, we will need enlightened educators”.

Who is the proper educator for you?

Every human being is born with the ability to educate. The proper educator is he who knows his field of study, who loves children and is cultured. The educator who is characterized by culture has the ability to find new ways of communication between him and the children. If the educator loves the children, his field and culture, he is the most wised choice. This view on things is not romanticism as many might accuse me of. It is only realism. And we, in recent Greece have a major lack in culture. This is our problem. If we change this, if we educate our nation properly, we will face a different future.”

The entry of Cyprus for the 2021 Eurovision song contest has sparked wide controversy among ultra-conservative Christian groups on the Mediterranean island.
Greek News