The Independent Reports on Greek Olympic Mission Overspending Despite Crisis 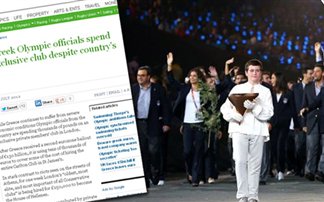 While the UK is spending millions of pounds to organize the opening ceremony of the London Olympics 2012 and another 40,000 pounds because someone lost his keys in Wimbledon the British daily ‘The Independent’ scolds the Greek Olympic Team for irrational and excessive expenses made during a time of crisis.

“While Greece continues to suffer from severe economic conditions, Olympic officials from the country are spending thousands of pounds on an exclusive private members’ club in London,” read the report. Drawing a comparison between the social turmoil and financial breakdown seen in the past year in Greece and the thousands of euros spent to hire the Carlton Club in St James, the report concludes that the Hellenic Centre in Marylebone would have been a much more ‘modest’ choice instead of the home of the Conservatives.

According to the report, the organizers chose one of the oldest private clubs to turn it into the “House of Hellenes” by paying 150,000 pounds a day.

Harris Ikonomopoulos, British Hellenic Chamber of Commerce Greek president, told The Independent, “It was the duty of the private sector to organize and host the national Olympic home even for only a part of the Games.”

Private firms and Greece’s part-state owned lottery company are the main sponsors of the event.

The report also featured the opinion of an ex-pat currently living in London, who claims that this event is a project run by Greek millionaires and bureaucrats and has nothing to do with helping the debt-ridden country.