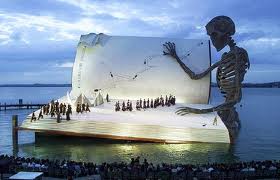 Austrian media praise young tenor of Greek descent Dimitrios Flemotomos who will be starring in a famous opera performance held by the Outdoor Opera Festival in Sankt Margarethen, Burgenland. Burgenland is situated in the eastern part of Vienna, close to the borders with Hungary.

The Greek artist is playing the main hero of the performance, Don Jose. As is obvious for those interested in operas, it is Georges Bizet’s distinguished opera “Carmen,” which has been presented worldwide several times. It is one of the most beloved plays of the opera aficionados and Austrians as well. The play will be presented four times until August 26 and 4,800 people are about to attend.

Greek Dimitrios Flemotomos is well-known all over the world and thus, his participation in the Austrian opera festival has captured the attention of the international press.

In 2007 Dimitrios Flemotomos won the “Maria Callas” scholarship and continued to study at the Academy of Music in Munich with Daphne Evangelatos. He has been awarded several international prizes and has acted in prominent opera houses as well.