TechNews
GreekReporter.com Greek News "Onassis. The Play..." To Be Presented Next September in LA

"Onassis. The Play…" To Be Presented Next September in LA 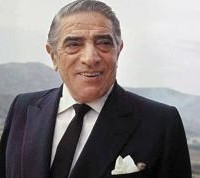 A theatrical play based on the life of late Greek magnate Aristotle Onassis, entitled “Onassis. The play…,” will be presented at the Stella Adler Theatre in Los Angeles, premiering on September 14.

Famous Greek-American actor Anthony Skordi will star in the play. It is actually a monologue describing Onassis’s whole career, from its very beginning, its peak until its fall.  The ultimate purpose of this play  is to showcase abroad the true life of the renowned Greek businessman.

“Many comments have been made in regards to the Greek tycoon, such as the assumption that he was responsible for the John and Robert Kennedy executions and that he was a tough, strict and insensitive hedonist. With this play, they will make an effort to present the real Onassis and leave lies about his life behind,” reports The National Herald.

His relationship with Maria Callas, Jackie Kennedy and members of his family will also be presented on stage.

Actor Anthony Skordi, after having completed theatrical studies in London, collaborated with the Royal Shakespeare Company and the Vanessa Redgrave theatrical team. In the past few years, he became popular abroad thanks to participation in American TV series, such as “Detroit 187” and “Men of a Certain Age.” His latest role was in Kevin Spacey’s “Envelope” where he took the role of protagonist.