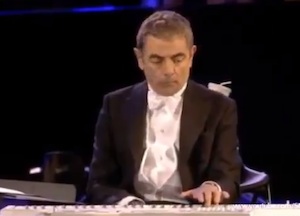 The one and only Rowan Atkinson, a.k.a. Mr. Bean made an appearance during last night’s London Olympics Opening Ceremony. Mr. Bean played a few integral notes during Chariots of Fire enthralled the spectators with English humor.

Atkinson took centre stage as a part of the London Symphony Orchestra conducted by famous music conductor Simon Rattle. As the orchestra played out a rendition from the Chariots of Fire, written by Greek composer Vangelis Papapthanasiou, Bean was seen playing a single note on the keyboard.

Bean slowly dozed off while playing the single note. Cut away to a scene of the iconic film “Chariots of Fire”, where Bean tripped legendary British athlete Harold Abrahams to breast the tape first during a classic beach-running montage.

Again cut back to the stadium, Bean was seen still tapping his one note even after the song had ended. The crowd cheered to Mr.Bean`s cameo and to the music of the internationally known Vangelis.  Watch the video below:

What Has Russia Ever Done For Greece?