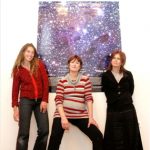 Until the 29th of July, the exhibition under the title «Images of the World-Illusions of the Universe» is taking place in Rhodes Island in Greece at the French Consulate.
The opening ceremony took place last Saturday and the three artists exhibited their works giving the opportunity for the public to experience a unique exhibition. The head of the exhibition, lector of the Pedagogical Department of Primary Education of Aegean University, Ms. Mary Savaidou-Koumpouropoulou stated:
«Presenting our personal impression for the exhibition is not a deterrent for the creative imagination and  freedom of criticism of the viewers of the exhibition. On the contrary, we aim to trigger public curiosity and lead to personal interpretative paths. During this exhibition, the wideness of the subject, the clever handling of the subjects and the historical context that the exhibition belongs to, offer its special meaning».
The three globally-recognized artists, whose paintings are the central objective of the exhibition  are Ms. Elena Polychronatou, Ms. Mary Kouri and Ms. Elena Hatzichristou. Their life stories are worth mentioning:
Elena Polychronatou holds a PhD in Arts and Environment while she also holds a degree in painting and sculpture. She has presented her work in various exhibitions in different cities in the world, such as Greece, France, Italy, Holland, Romania, Canada, Albania, Turkey, Lebanon and Morocco. During 2002-2003 she participated in the international program with the title «Communication-Art» organized by the FAM organization and UNESCO in France, Greece and Italy in order to broaden  pedagogical horizons. She has also organized and participated in scientific conferences regarding the public, environmentally-friendly art, and has published relevant articles in artistic and educational journals. She is also a founding member or the «artreeteam» a local, non-governmental organization aiming at the protection of the environment and art and she is the first lector of the Theoretical Department of the School of Fine Arts heading in Athens.
The second artist, Mary Kouri, combines free thinking with images, inspired by her instinct and the friendly people that meets in each of her missions. Her aesthetics derive from her ability to observe the world, the needs of her soul and her restless spirit, which are all food for art. Mary Kouri has previously exhibited her photograph works in different places of the world, such as Johannesburg, Barcelona, Ankara, Athens, New York, Beirut and Tokyo. She has been awarded with the international prize of SCOOP. She currently works as a freelancer photo reporter and cooperates with journals such as National Geographic, Passport, Geo, Grandes Viajes, La Republica and Der Speigel (www.marokouri.com).
The third artist, Elena Hatzichristou holds a degree in astrophysics and a Master’s degree from the Parisian observatory while she is also a Doctor in Leiden University in the Netherlands. She has cooperated for many years with major research and academic institutes of the world such as Yale University, The institute of the Hubble Space Telescope, the NASA Goddard Space Flight Center, the Northern European Observatory in Chile and the National Observatory heading in Athens. She is also a Dean of the Greek Annex of the City University of Seattle. She is also a writer, having published numerous scientific works, more than 200 articles, book reviews and interviews with important scientists and artists. In 2006, she published her book under the title «Exploring the Universe». In 2011, she was recognized as one of the 13 female role-model scientists in Europe.
Through the exhibition «Images of the World-Illusions of the Universe» the public will have the opportunity to mentally experience a trip through art and life, researching and observing the meaning of being and the humanity and will be offered the opportunity to demolish stereotypes and discover the magic of the cosmic wisdom.
The three globally recognized artists and scientists, members the FAM organization existing in 25 countries of the Mediterranean, are exhibiting their works in order to create a stepwise escalation that allows space for movement through space, movement from the ineffable to infinity, from the intimate to the intergalactic and diverse.
Meanwhile the lectures that the three artists will give for the promotion of the exhibition conclude this unique experience and transform the thrill of contact with art into a positive and deep knowledge, offering the spectators the ability to enjoy the meaning of life and the world. Thus, the spectators of the exhibition can mentally travel to unexplored places inside themselves, into the plethora of the female planet, and are offered the possibility to admire, be inspired and enrich their knowledge and in the end leave from the exhibition filled with feelings, questions and sparkles of curiosity and willingness to explore.