Madonna: “Greek People Have Nothing to Eat” 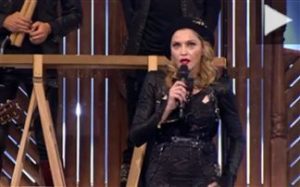 Famous pop singer Madonna decided to talk about financial issues on stage to showcase her political and social feelings to her French audience.

In a concert held in Olympia Stadium in Paris, Madonna stopped singing for a few minutes and commented on the financial crisis and its impact on Greece. She said that world is entering into very scary times due to international markets collapsing.

She did not forget to mention Greece as well. “People in Greece have nothing to eat,” she added. “People all over the world are suffering while many are afraid,” she continued and explained that “when afraid, people become intolerant and are pointing the finger to others.”

The pop singer concluded that “there’s no enemy. The enemy is within.” Watch the full video below: [youtube]nB2MA5yEvaM[/youtube]