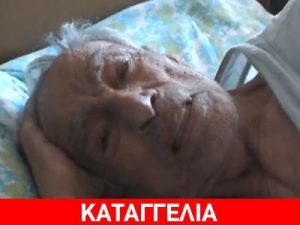 An elderly pensioner voiced a cry of distress at two local media agencies in the island of Rhodes over his being deprived of the life-supporting oxygen device due to his insurance fund debts to the respective medical supplier.
Emmanuel Taktikopoulos, pensioner from Farmer’s Fund OGA sent a desperate and condemning letter to the judicial and administrative authorities of Rhodes, as published by Channel 4 and the online daily “The Democratic Online,” pleading for help and advice to overcome the cruel and organized abandonment of aging patients across Greece.
“Please tell me how to resist the nation-killing fraudsters that tore my country apart and aim at decreasing the Greek population by abandoning the aging patients. The medical supplier “Pneumon” took my oxygen device away because my insurance fund, OGA has not paid for its debts” read the letter.
The monthly pension of Taktikopoulos reaches 300 Euros and leaves no room either for him or his family to help him survive. He needs oxygen supply 16 hours per day. For the time being he uses oxygen-masks for children but the situation is rapidly escalating and his children plan on taking judicial measures.
After contacting the OGA local branch and the Athens headquarters, the family was told that nothing could be done since the Fund has debts to its suppliers. “This is a violation of the Greek Constitution. I cannot put up with the crimes of this economic war we are going through. […] My protest mirrors the lack of respect shown by the state towards its elderly citizens,” noted Taktikopoulos, whose lung inefficiency was caused by the job he was doing.