The Greek Jewish community sent a letter to the country’s political leaders and the President expressing its aversion towards the decision of far-right party Golden Dawn to select an anti-Semitic musician as an MP, after former Golden Dawn MP Nikitas Siois’ resignation.
Head of the party decided to name Mr Artemios Matthaiopoulos as their voters’ new representative. But Greece’s Jews are clearly opposed to this man due to his general profile.
“This composer of hate lyrics that praise Auschwitz, offends the memory of the six million Jewish victims of Nazism — of whom 65,000 were Greek Jews, and also offends thousands of their Christian fellow Greek citizens and vulgarly trivializes Jews and their sacred places, is now a member of the Greek Parliament,” said the letter from the Central Board of Jewish Communities in Greece sent Thursday.
They explain that he was a bass player in a hard rock Greek band called “Pogrom,” which played “fiercely racist, fascist, vulgar and anti-Semitic songs.” One of the band’s songs is entitled “Auschwitz” and it has many offensive lyrics, such as “f… Anne Frank, f… the tribe of Abraham” and “piss on [Jerusalem’s] Wailing Wall.”
With their letter, Greek Jews are pushing Greek President Karolos Papoulias to “take all necessary measures to keep people praising Nazism out of the Greek Parliament.” 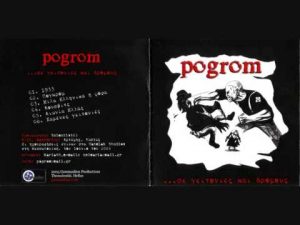 In the picture on the right, you see an album of the Greek band. Some of its tracks are entitled “Auschwitz,” “Speak Greek or Die” while the CD cover shows a Nazi, with a swastika around his arm, punching someone resembling a Jew while a young girl, probably Anne Frank, is watching.
(Source: Haaretz.com)