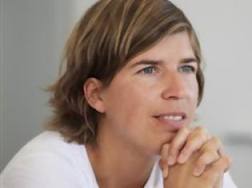 The German National Olympic Committee rushed to condemn the “cowardly fake” Tweet post spread through the Internet on Friday concerning an alleged racist comment made by German hockey athlete Natascha Keller aiming at the Greek athletes of the London Olympics.

The controversial tweet read: “The Olympic village is filled with barefoot Greek athletes. As soon as we see them we are afraid that they will ask us for loans.” Soon it sparked anger among Greek bloggers who protested the unfair comment made just days away from the Papachristou expulsion case over similar reasons.

According to Reuters, the German Olympic mission chief Michael Vesper said in a statement that the whole act was cowardly and needed no further notice. The German athlete appeared to have shut down her public Facebook and Twitter accounts after reports of the tweet surfaced. However, the offending message could not be found on her Twitter account before it was shut.

Vesper also noted that the athlete was chosen to be the flag-bearer of the German mission in the London Olympics because of her so far dedicated life to the ideals of sports, her humble personality and successful performances over the years.