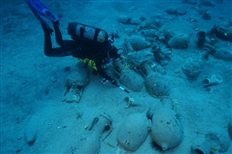 Archaeologists have discovered ancient shipwrecks near the island of Makronissos in the Aegean Sea, dating back to the second century BC through the forth century AD.
More specifically, the Ephorate of Underwater Antiquities and the Hellenic Centre for Marine Research found, after diving expeditions that took place in the area for a whole month, six ancient shipwrecks and as a result, are having now a clearer image of trade in ancient times.
The ancient items found underwater were mostly amphoras from north Africa, Sicily and Rhodes island, according to Greek Ana news agency. The antiquities were lying at a depth of 37 to 47 metres inside what remained of four ships.
In a more northern part of Greece, that is in the Gulf of Evia, archaeological teams found two more wrecks- the first one dates back to first or second century AD and contains building materials while the second one is estimated to be of the Hellenistic times. In the broader area of Evia, 18 shipwrecks have been identified so far and thus, scientists assume that the Gulf of Evia was a route of significant commercial importance in ancient times.