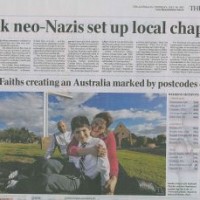 The Australian reported that “a splinter group in the Melbourne Greek community has been condemned for launching a local branch of the extreme right-wing Golden Dawn party.”

The article notes that the group has a Facebook page (https://www.facebook.com/xryshavgh.melbourne) and alleges that members attempted to disrupt a rally celebrating Greek Independence Day (March 25).

The mission to use the cover of the internet to create a nationalistic political force among one of the world’s largest Greek communities outside Athens has been savaged by Australia’s Jewish and Greek communities, adds The Australian article.

As noted in John Ferguson’s report, the group’s Facebook page currently has over 2,500 fans, but only a few dozen of these appear to reside in Melbourne.

As it stands, then, Golden Dawn (Melbourne) currently has only a small core of followers.