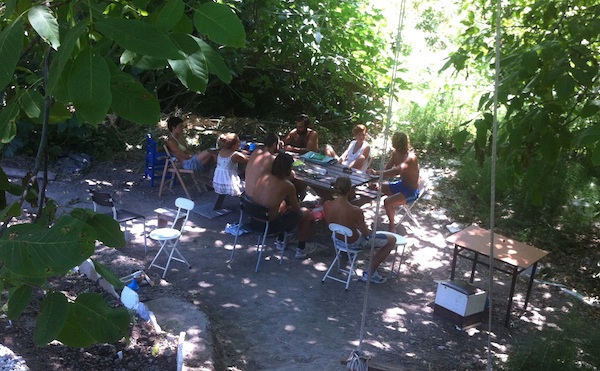 Αpostolos Sianos is 32 years old and wanted to redefine his way of life and adopt an alternative one. Sianos and three friends gave up their jobs and lives in Athens and moved to Mount Telethrio on the island of Evia, where they started a small, environmentally friendly community that lives off the land, one that can be replicated –wherever there’s good will- in other parts of the country as well.
The main aim of the endeavor, which was joined by another five people, is to teach people to live with as much autonomy as possible and to help the idea catch on.
The four founders of the community met online two years ago and exchanged views on ways to cut themselves off from mainstream society. So they decided to start on a piece of land on Evia owned by Sianos’s father, living in tents and growing their own basic products. Their community began to take shape as they experimented with different ways to build permanent shelters using wood and clay, ending up with a cluster of yurt-like structures.
They alternative fellowship chose this particular building method, as it’s the only one not requiring a state permit. They searched online and found answers to questions such as how to make your own soap and how to manage human waste without harming the environment.

Through its international online campaign, the group managed to collect 10,000 euros’ worth of donations. They used the money purchased a bigger plot of land in Agio, outside Edipsos in northern Evia.
Every problem that has popped up has been noted in the group’s manual — a collection of guidelines for other initiates to the Telethrio project lifestyle.
The biggest obstacle the group faced was suspicion by the local community. It took a lot of hard work and hours of volunteering to help out in and around the nearby villages to eventually earn their trust.
Some residents even donated their land to the project, whose members in turn helped introduce them to new ways of farming and to more grassroots activities.
When they held their first public information campaign in early summer, it was attended by dozens of people interested in how to start their own version of the Telethrio project. People of all ages and social status were curious to find out how the project actually worked and if they could apply it to their own lives at some point and if necessary.