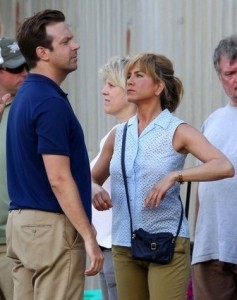 Jennifer Aniston and Jason Sudeikis were caught in a fun moment in recently released photos from the set of their new film, “We’re the Millers.”

The film is currently shooting on-location in Wilmington, North Carolina, and revolves around a marijuana dealer who puts together a fake family so he can smuggle a huge amount of weed from Mexico to the U.S. The usually sexy Aniston takes on a much more toned down look for the role. Emma Roberts, who just wrapped up playing Nancy Michaelidis in the upcoming “Empire State,” stars as the fake daughter in the plot.

This is the third time Aniston and Sudeikis have paired up on-screen together; the first was for “The Bounty Hunter” in 2010, and then “Horrible Bosses” in 2011.

“We’re the Millers” is being directed by Rawson Marshall Thurber and is scheduled for a 2013 theatrical release.