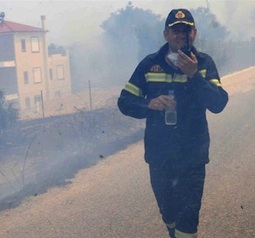 Greek authorities evacuated a children’s summer camp and a monastery near Athens on Thursday as a wildfire swept through forest land, damaging five homes and threatening others. The blaze was one of several dozen reported in the country over the past two days.
The fire brigade said no injuries were reported from the wildfire near the town of Keratea, some 40 kilometers (25 miles) southeast of the capital. Officials said the children’s camp and the monastery were evacuated as a precaution, but it was unclear how many people were removed.
More than 100 firefighters were striving to contain the blaze, assisted by seven water-dropping planes and two helicopters.
The cause of the fire was not immediately clear, but such blazes are common in the hot, dry summer months.
(source: AP)