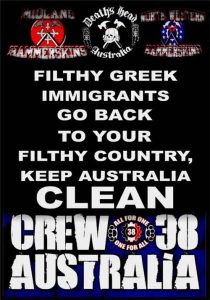 A not-so-friendly poster has gone viral all around the globe in the past few days. As is obvious, extremists are everywhere, both right and left. A Greek far-right party entered the Parliament on June 17, while having a run for the election with the slogan “Keep Greece clean- Get rid of them,” probably referring to illegal [or not] immigrants. It is now Australian extremists’ turn to spread their beliefs abroad.

Australia’s ‘Hammerskins’ describe themselves as “racially aware, racially proud White people” and call unregistered users of their website to “just leave if racial conversations bother them.”

Many Greek citizens voted for Greek far-right party claiming that ‘our’ immigrants, that is friends and relatives having migrated abroad live peacefully, work hard and have not done any harm to anyone in contrast to those people who have moved to Greece illegally. Of course, this might be true for Greeks abroad.

No matter good or bad immigrant, as appears, there are people who hate foreigners all over the world. And sometimes, they opt against [with a not so pleasant way] our beloved people living abroad, just because they are not White enough or Australian enough.

According to supporters of Australia’s Hammerskins though, this poster is a fake one! They claim that Greek left-extremists have spread it around the country to make Greeks dislike far-right groups.