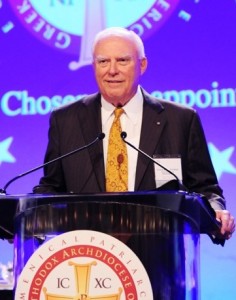 Leadership 100 Chairman, Charles H. Cotros, told the 1,200 participants at the Plenary Session of the 41st Biennial Clergy-Laity Congress of the Greek Orthodox Archdiocese of America on Wednesday, July 4, 2012, that Leadership would meet new challenges in continuing its support of the National Ministries of the Church and humanitarian assistance “as part of our calling as Orthodox Christians and good stewards.” He presented the delegates with “The Leadership 100 Legacy of Giving,” a membership brochure describing the more than $33 million in grants distributed by the organization since its founding in 1984.

Cotros said that Leadership 100 grants were instrumental in starting International Orthodox Christian Charities (IOCC) and the Orthodox Christian Mission Center (OCMC) and had been essential to the support of Holy Cross School of Theology by providing $14.4 million in scholarships to prepare young men for the priesthood, which would continue with another $10 million through 2018. He also emphasized grants to the National Ministries that included the technology infrastructure for the Archdiocese and Internet Ministries, Youth and Young Adult Ministries, including funding for youth to attend Metropolis summer camps, and a commitment to the Office of Interfaith Marriage to provide resources for programs to encourage interfaith couples to remain active and raise their children in the Church.

At the beginning of the Congress, Cotros joined His Eminence Archbishop Demetrios, Metropolitan Sotirios of Toronto, representative of the Ecumenical Patriarchate to the Congress, and Metropolitans Methodios, Nicholas, Gerasimos, Congress host, and Evangelos for the cutting of the ribbon at the official opening of the Congress Exhibit Hall, which Leadership 100 underwrote with a gift of $25,000, along with additional support of $20,000, including $15,000 for the Clergy and Presvyteres Workshops.

The Congress officially began its work Monday, July 2, at the JW Marriott Desert Ridge Hotel with the Keynote Address of Archbishop Demetrios to the delegates, clergy and laity, of both the Clergy-Laity Congress and National Philoptochos Convention. His Eminence defined the mission and outlined the steps necessary for the fulfillment of the theme of the Congress with the charge by Our Lord Jesus Christ, who has “chosen and appointed us to go and bear fruit,” after first expressing gratitude to God and devotion to His All Holiness Ecumenical Patriarch Bartholomew, along with wholehearted wishes for the Patriarch’s 20th anniversary on the throne of Constantinople. He also expressed thanksgiving to God in noting the contributions of the Archbishop Iakovos Leadership 100 Endowment Fund.

The host Hierarch, Metropolitan Gerasimos of San Francisco, outlined the unique role of the Clergy-Laity Congresses in promoting unity, fully disclosing the affairs of the Church and bringing together all parishes, urging the delegates to actively participate and take the message of the Congress back to their communities.