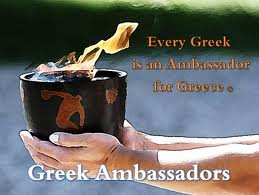 The Greek financial crisis and its detrimental impact on employment, household income, pensions and access to welfare and medical support has given rise to unprecedented adversity within the social fabric of Greece, the home of democracy and the cradle of western civilization.

In an immediate response to direct requests for urgent assistance by Greek families, the newly formed group and not-for-profit association Greek Ambassadors (Every Greek is an Ambassador for Greece), has partnered with global courier giant DHL and DHL State Operations Manager of Queensland/Northern Territory, Mr. Ronnie El Cheikh, to deliver three parcels of aid to the value of approximately $3000.

The parcels contain donated items (including food, clothing, and children’s toys) which will be delivered free of charge by DHL Express on 23 July 2012, and will reach the Greek families directly, within three days of leaving Melbourne’s shores.

This is the first of a number of charitable activities that the Greek Ambassadors will be undertaking in support of Greece and of Greek people during the current social and financial crisis.

Greek Ambassadors is a dynamic voluntary movement dedicated to active participation in activities that unite Greek people and friends of Greece globally, for the purpose of driving positive outcomes for Greece and for Hellenism.