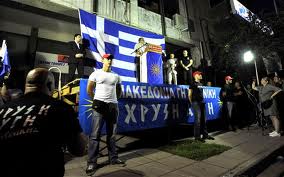 A few days ago, far-right Golden Dawn party announced their decision to run blood donations for Greeks only. Doctors and medical authorities of the country expressed their outrage over this statement and marked it as “inhuman and racist.”
Golden Dawn has recently organized soup kitchens for Greek citizens as well, not permitting people of other ethnicities to attend. They put up posters all over Athens calling for volunteers to donate blood “for Greeks who need our help.”
Party members, commenting on the blood donation, made clear that bottles collected will be provided to people they choose, not to everyone.  They also added that they will cooperate with a big Athens-based hospital on the “selection” of patients.
But, as appears, it was a big lie. Health officials replied that such action would be illegal. Moreover, hospital’s manager Yiannis Stefanou said that they will not make any such discrimination, no matter what party members claim.