Indian film actress and fashion icon Sonam Kapoor has been a fervent enthusiast of ancient Greek braid hairstyles showcasing them in different recent awards shows. Being the brand ambassador for cosmetics and beauty company L’Oreal, the young Bollywood star is reviving the ancient Greek style in modern times.

The classical and ornate Greek hairstyles of ancient times remain one of the most frequently tried hairstyle among celebrities and ordinary women. The Grecian influence can be seen in fashion and beauty circles. A popular Greek hairstyle is the wavy chignon with curly tendrils hanging down over the ears, near the front of the face, as well as the use of buns and braids.

According to BodlSky.com and as seen in the pictures following, Sonam Kapoor has chosen among the following Greek hairstyles, such as the Band and the Beautiful Band, the Greek Half Pony, the Greek Country Girl and the Simple Braided Roll. 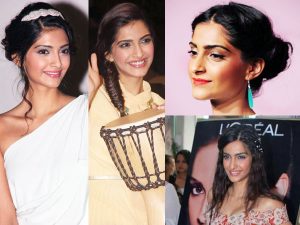 Designer Yannis Dimoulis uses his platform of over 23,000 followers to explore the often-comedic nuances of being Greek-American.
Crime