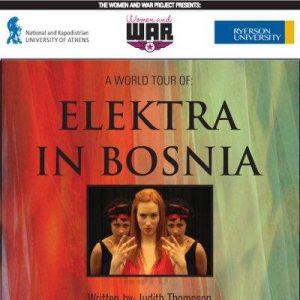 The Canadian Embassy in Athens presents “Elektra in Bosnia,” a drama by acclaimed Canadian playwright Judith Thompson, which is part of the “Women & War Project.” To date the latter has included an international conference on Hydra earlier this month, a series of theater performances and a photo exhibition from Ryerson University’s Black Star Collection.
Sponsored by Toronto’s Ryerson University, the Social Sciences and Humanities Research Council of Canada (SSHRC), the University of Athens, Hydrama Theatre & Arts Center, and the University of Southern California, the “Women & War Project” is designed to shine a light on the experience of women in war, both past and present, using Greek drama as a means of inciting public discourse.
A team of social scientists and renowned theater, dance and music artists is working to create the momentum for a global examination of women and war by taking three new theatrical productions on tour — “Elektra in Bosnia, “The Intuition of Iphigenia” and “Ajax in Afghanistan.”
The new versions of the ancient Greek plays and myths have been written respectively by three leading female playwrights: Judith Thompson, representing Canada, Velina Hasu Houston, representing the United States, and Timberlake Wertenbaker, representing Britain.
“Elektra in Bosnia” aims to give voice to the women of Bosnia during the 1992-95 war. It was a war that was watched by the world, in which brothers fought brothers and women became a weapon of war, as rape and murder became part of a soldier’s job. The themes of fighting within the family are central to Sophocles’ ancient drama and have been adapted here by Thompson to a contemporary reality.
Thompson, an acclaimed Canadian playwright, director, screenwriter and actor, is the author of two feature films, numerous radio plays and more than 15 plays for the stage. She has won several awards, including the Amnesty International Award for Freedom of Expression for her play “Palace of the End.”
Also part of the “Women & War Project” is a photo exhibition of 60 powerful images dating from 1945 to 1990 that portray women’s roles in war. The photos will be on display at Athens University’s History Museum until Thursday, July 12, and are on loan from Ryerson University’s Black Star Collection.
“Elektra in Bosnia” is in English and will be performed at the Amphitheater of Athens University’s History Museum (5 Tholou, Plaka) on Wednesday, July 11, starting at 9 p.m.
Find out more at the Facebook profile of the Friends of Canada.