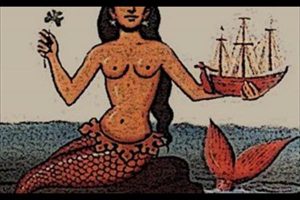 The Thessaloniki Association of Professionals and Traders (OEETH) launched a new initiative aiming at presenting the Mermaid Thessalonike as the new emblem of the Northern Greek city abroad.
Stressing that the original historic symbol of the city of Thessaloniki is the Sister of Alexander the Great, the Association aims to spread the legend of the Mermaid throughout the world. The historic White Tower that used to be the most easily recognized landmark of Thessaloniki is set to be replaced by a new statue 6 to 7 meters high.
OEETH suggested raising the monument of Mermaid Thessalonike close to the seafront of the city, at the old square opposite to the new City Hall or at the bay opposite of Eleftheria Square at the city port. As noted in its announcement, the famous sculptor Palaeologos has been contacted to undertake the creation of the new emblem.
The Association claims that the White Tower of Thessaloniki built in the 15th century was used by the Ottomans as a garrison for prisoners on death row and cannot represent the city as such. On the contrary, the unique myth of the Mermaid of the Thermaikos Gulf would give the city a legend shared by no other city in the world, according to OEETH.
According to the popular legend, a mermaid lived in the Aegean for hundreds of years who was thought to be Thessalonike, the half-sister of Alexander the Great and wife of Cassander. The legend states that Alexander, in his quest for the Fountain of Immortality, retrieved with great effort a flask of immortal water with which he bathed his sister’s hair.
When Alexander died his grief-stricken sister, who was also in love with him, attempted to end her life by jumping into the sea. Instead of drowning, however, she became a mermaid passing judgment on mariners throughout the centuries and across the seven seas. To the sailors who encountered her, she would always pose the same question: “Is Alexander the king alive?”  to which the correct answer would be “He lives and reigns and conquers the world.”  Given this answer she would allow the ship and her crew to sail safely away in calm seas. Any other answer would transform her into the raging Gorgon, bent on sending the ship and every sailor on board to the bottom.