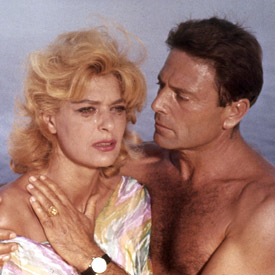 This year’s Toronto Greek Film Retrospective takes place July 12-15 at the Danforth Music Hall, and will honor the late Theo Angelopoulos. Described by organizers as “a series of free screenings to celebrate Greek cinema via an eclectic mix of films from the past 50 years,” the event promises to do just that with three days of Greek films to delight the senses.

Kicking off the Retrospective on Thursday, July 12, is Jules Dassin’s “Phaedra (1962),” a Greek tragedy-style film starring Melina Mercouri as a shipping magnate’s wife living in Greece who wants to reconcile with her son living in London. “Phaedra” garnered an Oscar nomination for costume design as well as a Best Actress nomination for Mercouri at the Golden Globes.

Also on the screening schedule is Michael Cacoyannis’ “Iphigenia”; 2011’s “Fred and Vinnie,” starring Greek-Canadian Angelo Tsarouchas, who will also host the event; Pantelis Voulgaris’ “Brides” aka “Nyfes”; “What My Eyes Have Yet to See,” from director Thodoros Marangos; “The Island” aka “Nissos,” Christos Dimas’ film which beat out “Avatar” at the Greek box office in 2009; and “Rembetiko,” directed by Costas Ferris.

With the passing of Theo Angelopoulos this year, the event also pays tribute to the late director, saying “As a young man Theo Angelopoulos realized he did not have the skill or craft to become the poet he wanted to be. Instead of dwelling on his perceived limitations he channeled his creativity and dedication to cinema and ultimately became the brooding Greek Chorus for his beloved county for over four decades.”