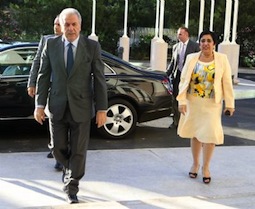 Foreign Minister of Greece Dimitris Avramopoulos has said that
Turkey is making a strategic mistake by not realizing that Cyprus’s’ participation in the EU and the discoveries of natural resources are a strong incentive for the quick resolution to the Cyprus problem.
Avramopoulos, who is paying an official visit to Cyprus, added that a Cyprus solution would be of benefit to all sides. “Unfortunately, Turkey continues to make partition threats and avoids having contacts with the Republic of Cyprus”, the Minister said, adding that Ankara is even entering into aggressive activities within the Cyprus’ Exclusive Economic Zone (EEZ).
The Greek Minister stressed that Turkey must end these actions that have led to a “dead end” and slow down a Cyprus resolution. “The aggressive attitude against Cyprus, as well as the formulation of threats against Cyprus must stop immediately”, he said.
Avramopoulos, who is making his first visit abroad under his new post, met on Sunday afternoon with his Cypriot counterpart, Erato Kozakou-Marcoullis, while a meeting of the delegations of the two sides followed afterwards.
In her statements after the meeting, Marcoullis said that Avramopoulos is the first official guest of Cyprus, on day one of the assumption of the Presidency of the Council of the EU by Nicosia.
The Cyprus Foreign Minister also noted that the two sides discussed an array of issues, including Cyprus EU Presidency priorities, the Eurozone crisis, the Cyprus problem, Turkish threats against Cyprus concerning its EEZ and Turkey’’s course to European ascension.
Marcoullis further thanked her Greek counterpart, as well as the Greek government, for providing technical assistance to Cyprus, while preparing for the EU Presidency.
Avramopoulos also referred to the landmark date of the launch of Cyprus’ EU Presidential term, coinciding with his visit on the island and said he was certain Cyprus would leave its mark in Europe during the next six months.
He added that the two sides also discussed the latest developments in the EU, following the latest convention of the European Council, as well as the situation in Syria and the wider Middle East.
The Minister said moreover that Athens will continue to stand by the side of Cyprus and that despite economic difficulties, Greece continues to be a strong stabilizing factor in the wider region.
On the Cyprus problem, Avramopoulos noted that ending the Turkish occupation of Cyprus and finding a comprehensive, agreed solution to the problem is the top priority of Greek foreign policy and a key to normalizing Greek-Turkish relations. Such a solution, he went on, should be just, viable and functioning, and be based on UN resolutions, EU principles lead to mutual acquiescence.
Asked about the decisions of the last European Council, Marcoullis said they were significant and that EU countries, especially in the south, should be able to benefit from them. In his reply, Avramopoulos said the Greek government is also evaluating these positive conclusions.
Earlier, the Greek Foreign Minister laid wreaths on the graves of Greek Cypriots hung by the British during the 1950’s anti-colonial struggle, and paid his respects at the “Tomb of Makedonitissa”, the war memorial and military cemetery where many Greeks and Greek Cypriots who perished during the 1974 Turkish invasion are buried.
(source: famagusta-gazette)