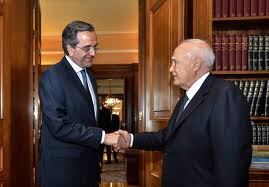 The President of the Hellenic Republic, Karolos Papoulias, will deliver a letter from the Greek PM to the leaders of the Euro Zone in the upcoming summit in Brussels on June 28-29.
Prime Minister Antonis Samaras will sign the letter referring to the current problems the country is facing, while also stressing that the recent elections expressed the people’s wish to remain within the Euro and the EU. Moreover, Samaras will underscore the necessity of Europe to respond to the needs of the Greek people.
According to a Proto Thema report, Papoulias will depart for Brussels at 5pm on Wednesday after meeting with caretaker Finance Minister Zanias, Minister of Development Hatzidakis and deputy Finance Minister Staikouras. Earlier on Wednesday, the President of the Republic had also had a meeting with Fotis Kouvelis of the Democratic Left party.
Papoulias will head the Greek delegation to represent the country in the coming EU Summit followed by Avramopoulos, Zanias, Hatzidakis and Staikouras.
A meeting among the three political leaders supporting the new Greek government was completed Tuesday evening, but none of the participants issued any statements. The meeting was held at Samaras’ house and revolved mainly around the coordination prospects and  the economic priorities of the new government, as well as the presence of the Greek delegation at the upcoming EU Summit and the way in which Greek positions should be best forwarded.

Wonders of Ancient Greek Technology on Display at Kostanas Museum