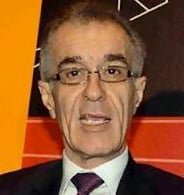 The chairman of National Bank of Greece SA (NBG, ETE.AT), Vassilis Rapanos, resigned from his post Wednesday, citing health issues, according to a letter of resignation he handed to the lender’s Board of Directors.
“After about two and a half years as Chairman of the Board of Directors of National Bank, I have to leave for reasons beyond my will,” Mr. Rapanos’s letter stated.
“As you already know, for health issues, I could not accept the honorary proposal made to me by the Prime Minister to take over the Ministry of Finance. For the same reason today I submit my resignation to the Board of National Bank,” he added.
Mr. Rapanos was named finance minister in the country’s newly formed, three-party, coalition government, but quit on Monday citing health reasons. He had been hospitalized for several days and was released from hospital on Tuesday.
The lender will hold its annual shareholders meeting on Thursday.
The new government is also considering replacing the chief executive officer of NBG, as it moves to install its appointees in key public- and private-sector positions just days after taking office.
A person familiar with the matter said the government has signaled that it wants NBG chief Apostolos Tamvakakis–who has led the bank since late 2009–to step aside. He would most likely be replaced by Alexandros Tourkolias, deputy CEO at the bank, who is said to be close to Prime Minister Antonis Samaras.
Although NBG is now a private company, the Greek state still holds a significant direct and indirect minority stake in it, and past changes in government have usually been accompanied by management changes at the bank, reflecting the lingering ties between the one-time state-owned lender and the government.
(source: Dow Jones)