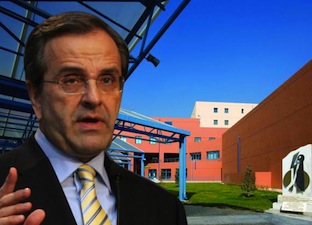 Greece’s government says its new prime minister will not be well enough to travel to a critical European Union summit in Brussels after undergoing an eye operation.
Antonis Samaras underwent surgery for a detached retina Saturday. Government spokesman Simos Kedikoglou said Sunday that the doctor treating him had forbidden him from flying.
Incoming Finance Minister Vassilis Rapanos will also miss the summit having been rushed to hospital on Friday before he could be sworn in, complaining of nausea, intense abdominal pains and dizziness. He remains in hospital.
Government spokesman Simos Kedikoglou said Greece would be represented at the EU summit by Foreign Minister Dimitris Avramopoulos and outgoing Finance Minister George Zanias.
Mr. Samaras’s week-old coalition government has called for the renegotiation of the harsh terms of the bailout, which is keeping Greece from bankruptcy.
Samaras underwent successful surgery to repair a damaged retina and Kedikoglou said he would leave hospital on Monday.
“The orders of his doctor are for him not to travel and to stay at home for a few days,” he said. The hospital said his condition was “good and improving.”
(source: AP, Reuters)