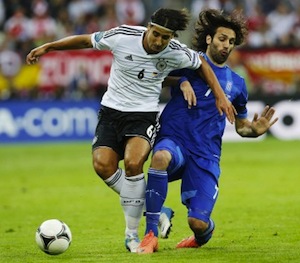 Greece plays a heavily favored German side in order to qualify for the semi-final of the Euro 2012 Championship today in Gdansk.  All times are local for Los Angeles.
1.38 PM: The game is officially over. Final score: 2-4 in the Greece vs. Germany match.
1.36 PM: 2 minutes overtime called for the second half of the game.
1.34 PM: Penalty for Greece results in a goal by Salpingidis! The score is now 2-4.
1.32 PM: An attempt on goal by Ozil is saved by Sifakis.
1.28 PM: Attempt by Fotakis on goal from a long distance out saved by Neuer.
1.25 PM: Double substitution for the German side. Mario Gomez is substituted on for Klose, and Gotze takes the place of Reus.
1.21 PM: Papastathopoulos is given a yellow after a tackle on Ozil.
1.20 PM: Another goal by Germany after some shoddy Greek defending.  Klose runs towards the box, the ball is deflected towards Reus, who scores.  Score is 1-4.
1.16 PM: The Greek side makes a substitution.  Makos is off, Liberopoulos is on.
1.14 PM: The German attack is pressing hard, another attempt on goal is blocked by Sifakis and cleared out of the box, resulting in a German corner.
1.13 PM: A German corner results in another goal for the German team by Klose: Score is 1-3.
1.12 PM: Muller is substituted on for Schurrle after Papastathopoulos gets into a scuffle with a German player.
1.11 PM: Corner by Fotakis.  No real threat for Neuer though.
1.09 PM: Germany approaches the box, but Greece regains possession, even though their advance is stopped in midfield.
1.08 PM: Greece is still pressuring the German side, leading to an attempt by Gekas on goal, which goes too high.
1.07 PM: Khedira scores a goal for Germany. 1-2 score.
1.00 PM: After a cross by Salpingidis to Samaras, GOAL FOR GREECE BY SAMARAS!! 1-1 score in the match now.
12.54 PM: After a challenge on the German side by Sokratis, Germany is awarded a free kick which is cleared from the box.
12.50 PM:  Hopefully Greece can turn around the game in the second half.  The score is still 0-1 after Klose’s goal for Germany, and the German side has had 82% possession in the first half.  Gekas has been substituted into the game in place of midfielder Ninis.
12.32 PM: Schurrie gets in a cross for Klose that’s deflected before another goal can be scored.  A very close call though.
12.25 PM: Lahm gets an opportunity after a good cross and scores a goal.  0-1 in Greece vs. Germany.
12.20 PM: Ninis takes a shot from a good distance out but misses.  A good effort.
12.18 PM: Samaras gets control of the ball but he doesn’t find support from the rest of the team. Shortly after, an attempt by Schweinsteiger on goal goes long and misses.  The score is still 0-0.
12.14 PM: The ball finds Salpingidis out of the way and undefended.  However, its a little long, and Neuer clears it out before Salpingidis can approach the box.
12.12 PM: Ozil attacks and gets the ball in the box, but Klose doesn’t manage to scoop it up.  The German attack is picking up and providing quite a threat to the Greek side.
12.11 PM: Sifakis steps up again with a good save after the German corner.
12.09 PM: Germany’s Ozil almost scores but is stopped by a tight save from the Greek goalkeeper Sifakis and cleared out by another Greek player.
12.06 PM: The Greek defense is holding up pretty well so far against the German side.
12.02 PM: Samaras gets a yellow card for hitting Schweinsteiger’s ankle.
12.01 PM: Free kick for the Germans because of the challenge between Samaras and Khedira.  It is easily cleared.
11.55 AM: First attack by Greece by midfielder Makos is struck from about 30 yards out and stopped by Neuer.
11.48 AM: Klose attacks and gets in on goal but is ruled offside.
11.46 AM: Greece kicked-off before the referee had blown his whistle, and there is a second kick-off without a countdown.
11.45 AM: Kick-off for Greece vs. Germany.