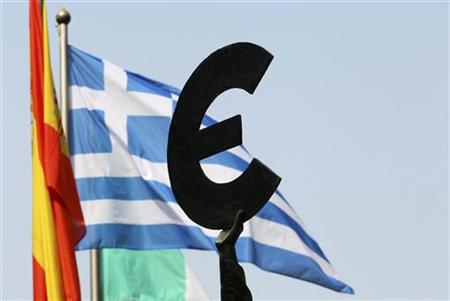 Eurozone Finance chiefs are weighing whether to ease the terms of Greece’s latest bailout.
Meeting in Luxembourg, finance ministers from Germany, the Netherlands and Finland are likely to balk at easing austerity measures Athens pledged to adopt earlier this year when it secured a $168 billion EU rescue package.  It was Greece’s second bailout in two years.
Some European officials acknowledge Greece will need more leeway to advance its economy, now in the fifth year of a recession.
The new coalition government in Athens says its goal is to boost the country’s economic growth and revise the bailout terms, but not so much as to jeopardize Greek membership in the 17-nation eurozone.
An adviser to Greek Prime Minister Antonis Samaras says the government wants to adhere to the basic loan agreement.
“As Mr. Samaras has expressed and described quite explicitly and in great length, we would like to alter the memorandum by extending the implementation period and replacing some of the austerity measures with growth measures,” said Tsomocos Dimitris.  “And having said that, definitely we would like to obey and abide by the goals and the objectives of the loan agreement.”
The ultimate decision on Greek debt relief is likely to rest with the eurozone heads of state, who meet next week in Brussels.
Spain is set to discuss the planned $125 billion rescue of Spanish banks, which euro leaders preliminarily approved two weeks ago.  Financial analysts fear that Madrid could eventually follow Greece, Ireland and Portugal in needing a bailout.
Spain again sold bonds to investors on Thursday, but its borrowing costs more than doubled from a comparable sale in March.
Meanwhile, a new survey showed European manufacturing is continuing to contract, down to its lowest point in three years.
(Source VOAnews)