Crete Organizes Celebrations for 100th Anniversary of Union with Greece 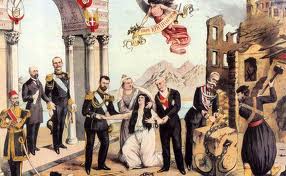 Under the banner “Union Forever,” the Prefecture of Crete has already begun organizing a series of events for the upcoming celebration of the 100th anniversary of the Union of the island with the rest of Greece.
The celebrations are scheduled to take place in 2013 and will be a symbolic demonstration of Crete’s joint course with Greece in contrast to some ideas suggesting otherwise, noted Prefect Stavros Arnaoutakis. The Cretan Prefect chairs the Organizing and Scientific Committee responsible for organizing and presenting the celebration events.
Events will be hosted in each municipality of Crete, in Athens, Thessaloniki and even Brussels. The president of the National Research Foundation “Eleftherios K. Venizelos” and also member of the Organizing Committee Nikos Papadakis noted that the people of Crete must not take seriously the ominous forebodings of irrational and cynical-minded circles working in darkness. “Crete looks into the next 100 years as being an inseparable part of Greece. The 100th anniversary celebrations will mark this new, hopeful and optimistic century,” added Papadakis.
According to Papadakis, the celebrations will present a trip down memory lane paying tribute to Cretan ancestors, their struggles and work dating back 100 years that aimed at unifying Crete and Greece.
The Organizing Committee is also complemented in its work by all four Prefectures of the island, the president of the Prefectural Council and the mayors of the four major cities of Crete. The Scientific Committee is joined by the Vikelea City Library, the National Research Foundation “Eleftherios K. Venizelos,” the Society of Arts and Letters of Eastern Crete, the Society of Historic Cretan Research, the Historic and Folkloric Society of Rethymno, the Cretan Museum of History, the University of Crete and the Prefectural Direction of Education in Crete.