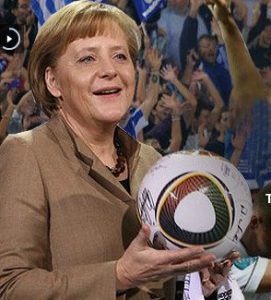 The upcoming Euro Cup match between the national teams of Germany and Greece is taking on unprecedented dimensions, turning into more than a mere matter of sports.
As announced by the deputy spokesperson of Berlin, Georg Streiter, Angela Merkel will attend the quarter-final match between the two countries taking place in Gdansk, Poland, after she received a formal invitation by the Polish PM Donald Tusk.
According to Reuters, the German Chancellor has not attended any of the previous matches featuring Germany due to a diplomatic boycott of Euro 2012 host-country Ukraine protesting against the jailing of former PM Yulia Tymoshenko. Moreover, the German Chancellor had also said that she would have to attend a meeting with European leaders that would leave her no time to visit Poland for the match.
Earlier today, the German press reported that despite her busy schedule, Merkel will eventually make it to Gdansk.
In the meantime, the German Embassy to Athens is wondering whether Antonis Samaras will also attend the match, according to a Proto Thema report. SYRIZA leader Alexis Tsipras had claimed in the past that he was also seriously considering attending a match of the Greek national team.
Anyhow, the pending game seems to have already turned into an ongoing viral fight on the Internet. Everyday numerous posts from both Germans and Greeks are being published in view of the game. Described by many as a match between “lenders and borrowers” or else a “Debt Derby,” both media and public attention are focusing on the upcoming match.
Football [Soccer] and Politics Don’t Mix
Players from both national teams have tried over the past few days to ease the situation escalated by Greek and German fans and media reports, explaining that politics have and should not have anything to do with sports.
“We cannot entangle football [soccer] and politics. It is bad to do that. Football is a game and we will play to enjoy it because we like it,” Giorgos Samaras told a news conference.
Samaras also underlined that the Greek team is playing for the Greek people and that it knows very well that Germany is one of the best teams in the tournament but will nevertheless do its best.
German midfielder Lars Bender also commented on the passion driving and inspiring the Greek team to perform the best it can and called his teammates to not underestimate their opponents’ power.